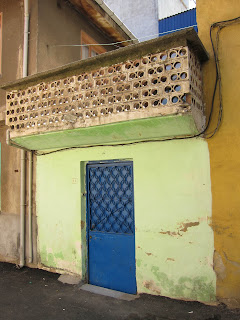 Blue door, Bursa.
My hotel in Bursa was hosting a convention I didn't know about and when I went to extend my reservation I leaned instead that I'd have to move out for five days. For my exile I chose a place I found on the internet, The Atamer Doğa Resort in nearby Gemlik, a coastal town on the Sea of Marmara.

Gemlik is an explosion of apartment buildings on the edge of a bay, one side occupied by the cranes that unload container ships and some kind of refinery, with dozens of smokestacks emitting white smoke and fumes day and night. The shoreline is thick with algae blooms and the refinery adds it quotient to the orange haze that not so distant Istanbul and other nearby cities generate. An inferno of industrialization occurs on the still waters of the Sea of Marmara. The hillsides are covered with olive trees and swallows with bright green bellies hunt in the morning. As I began my first walk in Gemlik, I left my room and descended down a vine-choked stairway and stumbled upon a arbor of untended and ripe grapes which I began to consume.
The world is carrying on a latent conversation, speaking to each of us personally but requiring a reversal of how we perceive, the echo of the gunshot being the point rather than the bullet. I saw this once again on my first day at the Atamer. That morning I'd read something from the Ibn 'Arabi scholar Stephen Hirtenstein, who wrote, "The inherent loneliness felt when we are among other people is because they seem to be somehow like us, contradicting our reality which has no likeness." This struck me as an analog to something Lord Mukpo conveyed so deeply and often, that because we can never completely convey our experience to someone else, sadness is an unconditional aspect of our being. The echo tells us nothing in life can be compared to anything, and in moments of fully discovering the poignancy of trying we find ourselves in love.


After reading Stephen Hirtenstein I had decided to take a walk, - the very walk in which I'd encountered the grapes. Soon enough I left the road to scurry up the hillside into the olive orchards. The grasses and other plants lay horizontal, parched by season's end and long faded. Only the olive trees were green. I picked an olive and polished it in my fingers, removing the dusty residue to reveal an even brighter green, the same color as the swallow's belly. The trees of the orchard were planted symmetrically, as ordered as a military formation. But their trunks were varied and primordially undomesticated and each revealed an unfathomably singularity and dignity. I was standing in a hillside of tathāgatas.
.  .  .
I will now describe the influences that brought me to Bursa.
In 2000, I took a trip to Spain and spent several days in Cordoba. I mostly wandered around, visiting the well known places in the old city, as well as the sides streets and modern avenues. Just outside of the old city gates and across the Guadalquivir river, I came across a museum dedicated to Ibn Arabi and went in. About all I remember of the museum is the large wax statue of Ibn Arabi, cast heroically as Jesus might be, and that I had encountered a major figure of world history and spirituality of whom I know nothing. I became enthralled by the Moorish history of Cordoba and the echoes of that time that could still be found; the visual ones of the architecture, and a spiritual echo that represented the enlightenment of the Sufis of Ibn Arabi's era - perhaps a time as thick with realized masters as Tibet or Japan were during their eras of great spiritual attainment (Karma Pakshi and Dōgen Zenji were  contemporaries of Ibn Arabi, as was St. Francis of Assisi).

Nine years later I rediscovered Ibn 'Arabi, though on a less extensive trip that simply required walking from my house to the storage shed along side it and retrieving a book with some of his quotes. A moment had occurred in my morning meditation, something from Cordoba spilling into a 2009 March day with snow on the ground. I became activated with a sense of new discovery and imperative, the energy of the dralas, and this continued for weeks. During this time, I remembered the book in my shed, a compilation of various Sufi teachings on love, and once I'd retrieved it, and then purchased others by Ibn 'Arabi, I began to read him regularly, which was to have his thought and metaphors enter my bloodstream, thought so thick with beauty and unexpected meaning I could feel my cells change.
I realized almost that I was being redirected or sent back into school. That moment of meditation was unequivocal, Lord Mukpo's dream time has suddenly incorporated my forgotten trip to Moorish Spain into it's geography and in an almost diabolical twist, I was shot into the language of God. The non-theistic terrain of Buddhism no longer had "theism" opposing it, which enhanced my confusion but also and my faith. Since then I've periodically inhabited as isthmus eaten away from two sides, the language of Buddhism and the language of mystical Islam, with the waters around being one, so to speak, those of Shambhala.


.  .  .
Our world is a globalized, geographical everywhere, with its ruined wells, witch hunts, emptied out libraries and dislocated ancestors, but also with it's enduring beauty, spread of knowledge and growing interconnected consciousness. Lord Mukpo brought the Shambhala teachings into this darkness and potentiality with language visions such as the term basic goodness, which he once described this way (these words are form my own transcripts and convey the unedited conversation he was having with the audience):


"The basic goodness is based on your first mind. Your first thought. Before your thought you have a gasp - aahh! (sudden inhale) "What should I think?" Before you think, even before you have a gasp there is that space that is the purity, that there is a… can you understand what I'm talking about?"

Lord Mukpo paused to ask the audience if they understood, and of course we mostly didn't. He was inviting us into "an ocean without shore" - to mix metaphors and switch to one of Ibn Arabi's - so how could we? He was simultaneously transmitting this first mind to us. In the same talk he explained his name, that Lord is like "the sky" and Mukpo is like "sunshine in the midst of the sky." If any of us fully experienced our own name as he did his we would be an ocean without shore ("or space infused with knowing," as Tulku Urygen would put it). One is utterly confused in the face of such a language/transmission yet one might "cross over" into it for a moment, an instant, loosing reverence points, the way we can feel tipsy looking down at the surf when we wade into it. Here is an example of Ibn Arabi describing the experience of "first mind":


“The moment” (waqt) is an expression for your state in time. The state does not attach itself to the past or future. It is an existent between two nonexistents. And if your Moment is the wellspring of your state, you are the son or daughter of your Moment, and your Moment determines what you are, because it is existent and you are nonexistent, you are illusory and it is affirmed. 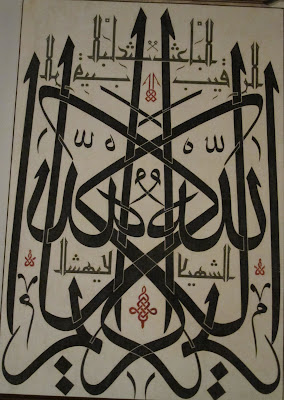 The calligraphy above is from Ulu Cami in Bursa (I took the photograph looking up, the calligraphy is high on a column, the camera slightly crooked). I'd first seen this calligraphy in one of the Ibn 'Arabi books I purchased in 2009, Journey to the Lord of Power: A Sufi Manual on Retreat, which was illustrated with copies, as noted in the introductions, of "the monumental mural compositions of calligraphy approximately eight feet in height" from the Grand Mosque in Bursa, Turkey. I'd never seen anything quite like these calligraphies and in that moment of learning where the originals were I realized I would go there (that is what the thought in the moment said; or course I forgot about it).

And as it has turned out, I've been in Bursa for over a month.

As I look at the calligraphy now it reminds me of the olive orchard, of some of the oldest olive trees, which were as densely irregular with their ancient growth as these brush stokes are uniform, but each convey the majesty of form and space as something we can never be apart from or escape and so our only option in the end is to surrender, awaken. The supremely stylized Arabic of the calligraphy says, Allah the Generous One, the Raiser of the Dead, the Guardian of All Existence, the Ever Present. This is our being, right down to the non-existent but apparent cells of our toenails. I hold out this calligraphy as evidence of the obvious realization-lineages within Islam, of an awesome and nearly hallucinogenic-symphonic beauty and as example of the long ways most of us have to go. It compels humility and an embrace of what is at hand. As Lord Mukpo said, in reminding us of the inevitable alternation between glimpses of the unconditioned and our relative life, how we are always returned to the life we have, "Instead of experiencing the boundless cosmic drink, the elixir of life, we might have to stick with Budweiser." 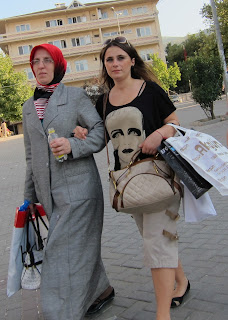 Posted by Bill Scheffel at 2:56 AM