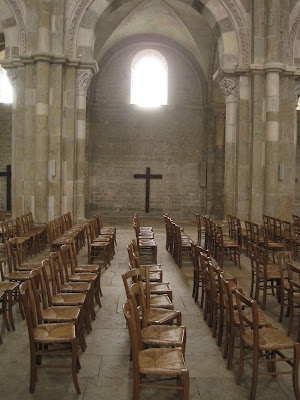 My mother, Alice Scheffel, died on April 17th, 2008 - exactly three years ago -  and I am suddenly finding myself preparing a blog entry to acknowledge her on this day, an inspiration that came to me only an hour ago. In presenting this entry for my mother, perhaps it will become a moment for readers to remember, and feel the presence of, their own ancestors.


. . .
Several coincidences align to present this tribute. The first, that my mother maintained her lifelong connection to Christianity and to the inspiration of Jesus, while also throwing off what had become for her the dogma of the church - in her case Episcopal - which eventually meant no longer attending church or particularly reading the bible. Instead she turned to authors who had also chosen to speak beyond the confines of doctrine - Bishop John Shelby Spong, for instance - and embraced an affiliation with Buddhism, a sense of kinship and ease with the teachings of Thich Nhat Hanh and Chögyam Trungpa in particular. She faced death with a confidence and even, I must say, a sense of celebration I am still in awe of (and only wish I could write more about now.)
Another coincidence is that in 2004 I traveled a route through northern Italy partially designed to see the frescoes and paintings of Piero della Francesca and in particular his fresco of Mary Magdalene, a work I had so long admired in reproduction that it had nearly become a deity and altar in my room, the expression of the feminine I most adored.
Last year - through a thicket of such coincidences I can still hardly believe them - I found myself traveling with a friend to the Basilica of St. Mary Magdalene in Vézelay, France. It was inside the church that my long-standing admiration for Piero's Mary merged with the atmosphere of one of the most beautiful (and living) buildings I'd ever entered. It was inside the church that I also had an encounter with my ancestors, my mother and father (my father died last August). A few days later I wrote about my time there:

Late in the 10th Century, a monk named Baudillon brought bone relics of Mary Magdalene to Vézelay. in 1050 the Pope confirmed them as genuine and for these subsequent 1,000 years a continuous stream of pilgrims, including Richard the Lionhearted and Thomas Becket, have made stops here. A crypt in the Basilica holds the well-lit relic, a bone fragment that looks like it came from a leg or arm and also resembles a spear. A spear can represent vertical time, but so can a six-inch long piece of femur. If a bullet was shot through a telephone book the hollow path of its trail would be a vertical but invisible spear penetrating each of the hundreds of pages of the book (and on each page hundreds of names). In the same way, hundreds of qualities of Mary Magdalene have come to make “Mary Magdalene”. It is the qualities that Mary evokes in those who think about her that make her Mary. 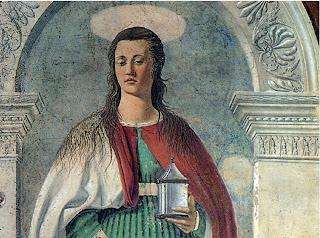 During my inspection of the church,  I deposited four Euros in a cash box in exchange for two votive candles, lit them, and stood in front of another Mary Magdalene, this one a stone sculpture depicting Mary comforting a baby. I lit and offered the candles for my parents, Alice and Bill. I wasn’t sure which verb tense to use as I prayed for my parents who felt with me (present), behind me (past) and in front of me (future). When I thought of how much they would have loved seeing this basilica my heart was heavy in the same way it was when I thought of how I could never tell them I was here. Thus I proved to myself that time as quantity is heavy, even a burden and tragedy. But the atmosphere in the room was thinking in vertical time, which made it completely possible to realize my parents are in my present, past and future at once. 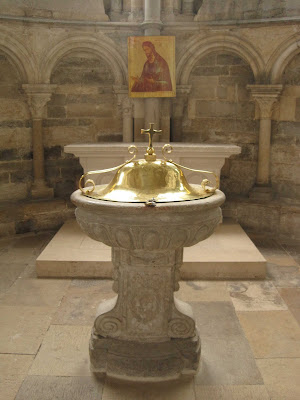 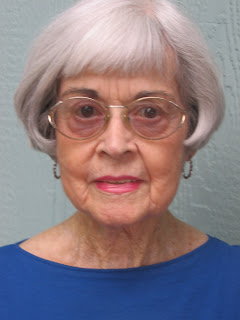 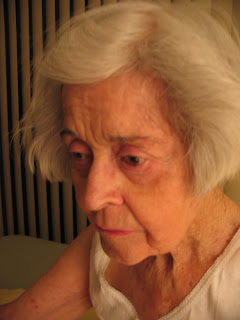 Alice, one week before she
died (on April 17, 2008).
Alice Scheffel on Nature and Memory from Bill Scheffel on Vimeo.