A dharma heir of Shunryu Suzuki-roshi, Jakusho Kwong-roshi, who once went by the name Bill Kwong, founded Sonoma Mountain Zen Center in 1973. Along the way, this founding required considerable tenacity and courage, it occurred through a stream of accidents, challenges, a bout with testicular cancer and, no doubt, the obdurate blessings of Dogen and the other Soto Zen forerunners. Kwong-roshi’s wife Shinko (who once went by the name Laura) has also been an essential part of this founding, a project done often on pennies, a large organic garden and a hard-working though joyful discipline. Roshi and Shinko raised a family of four boys in a house adjacent to the Zen Center.  Equally impressive, they have simply stayed put, running the Zen Center decade after decade with a handful of residents, keeping the kitchen stocked, the garden growing, the library open and, of course, practicing in the zendo, beginning each day with 5:00 A.M. service and zazen.
It is well known that  Zen includes this kind of hard work. Giving attention to our mundane and necessary tasks of daily life (with humor!) is an expression of love, an invoking of drala, as well as the way of Dogen, the founder of Soto Zen, who outlined rules not only for the zendo but for the bath house and kitchen. The fulfillment of Dogen’s transcendent common-sense advice can be seen at Sonoma Mountain even when all the machinery is idle. If the kitchen is empty that also means it is clean, since dishes  are never left to be washed the next day, and every meal-taker - including Roshi and Shinko - together wash, dry and put away what was used until every bowl is stacked, every drain board spotless. 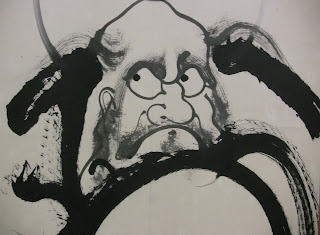 All their solutions still contain problems.
At dangerous moments on sinking ships
Suddenly we see their eyes full on us.
Though they do not entirely approve of us as we are
They are in agreement with us none the less.

Kwong-roshi is fond of citing the path of the Zen master, “One continuous mistake” (another form of solutions still containing problems). Kwong-roshi was perhaps offered a larger life-boat than the rest of us; after all, he was chosen to be a dharma-heir - that is a privilege and a motivator! Suzuki-roshi must have seen in Bill Kwong someone who wasn’t interested in wasting his life. So he tossed him that life boat-mill stone. Chögyam Trungpa appeared many times in Kwong-roshi’s life to tell him, so to speak, “You can carry it, you can float.” At seventy-two, Kwong-roshi is someone to meet if you would like to see this kind of genuineness, humor and courage at work.
Kitchen at SMZC 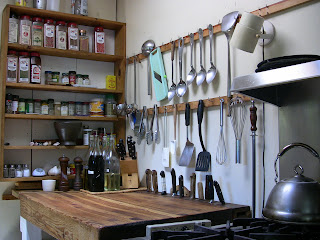 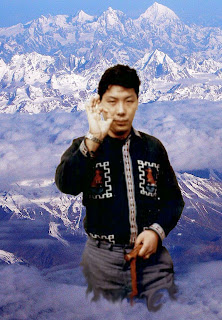