This week continues the themes of slowness, more tears (and adds the theme of "lineage"). It begins with a package that arrived on Monday that looked so big for a CD. Wasn't until I opened it that I realized I'd purchased the vinyl version of Dengue Fever Presents: Electric Cambodia. So I got my parent's turntable out of the storage locker and gave it a spin... 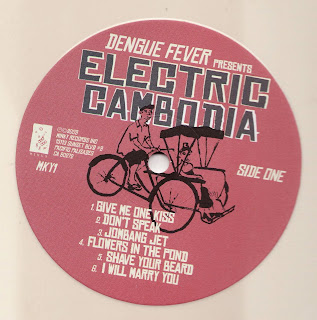 Listen to NPR interview with Dengue Fever and music from Electric Cambodia.
The drala principle like the out breath is analog, orbits at 33 and a third and can decorate the walls if the grid goes down. Finding the beginning of more tears wasn't hard watching the album spin on the dusty turntable and suddenly feeling my body thirty years ago, before answering machines, cell phone radiation and light emitting diodes. The digital stimulation we carry in our nervous systems is a shared subtle suffering, a speed up and faint daily torture. I long for my manual typewriters yet have committed myself to the Macbook screen.

On Tuesday I received an e-mail from my longtime friend Don Myer (who has been helping me edit an article I'm writing; Don can spot a typo across the room whereas I can be looking at one for three minutes and still not see it). Don has journeyed from a house stocked with bone white dinnerware, Bose CD players and other gizmos to homeless though not broke mendicant (he sold house and has the proceeds) to moving back in with his mother to shepherd her as best he can in advanced old age and dying. He takes care of her body and declining mind, along with his now sick and dying dog, Pele. Don has offered me countless meals and a place to sleep and his daughter Haley and my son Devin (both now age 26) were born within three months of each other. 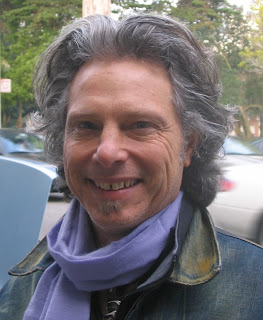 
Don is a generous and genuine human being and I adore him. This selection from his e-mail shows the sense of humor, curiosity and empathy that must be the weave of the human heart; a three-fold coil of joy that allows us to confront it all:

Thunder and rain here as I watch my procrastinations all evening to get down and read the article with note pad in hand. Twice I fell into a deep slumber, laptop a warm blanket but still feeling the exhaustion of my almost all-nighter. Pele shit right near me. It was the largest thing I'd ever seen. Like some alien movie. Poor thing. The disease makes her voraciously hungry and thirsty and she has access to unlimited dry food that usually she is not that interested in. That got my attention and woke me.

Don teachers Kundalini Yoga and is also a photographer. He worked many years in commercial photography and his own photographs are universally admired among his friends and family. He stayed up all night, getting around to editing my piece and finding some photographs - both "found" photos and his own - that  I could use on this site. I don't really know the history of them, or if he's given them names (so I've used the JPEG titles) 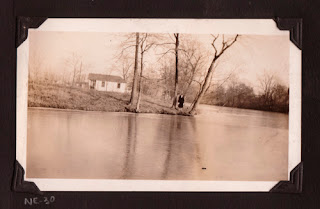 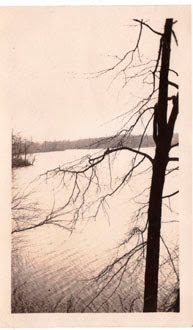 New Egypt Hudson
These previous found photographs, in Don's words: "The first two images you used in today's journal were from a beautiful old picture album from the twenties. I love the image of the woman standing on the banks of the frozen lake. I wanted to blow it up very large (6 feet?). I have made many pictures like it. 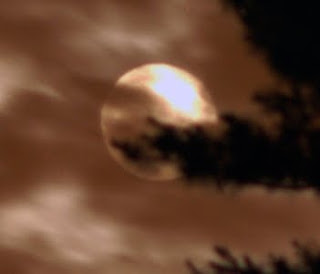 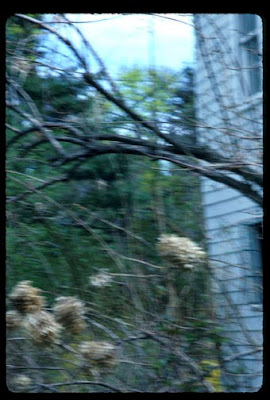 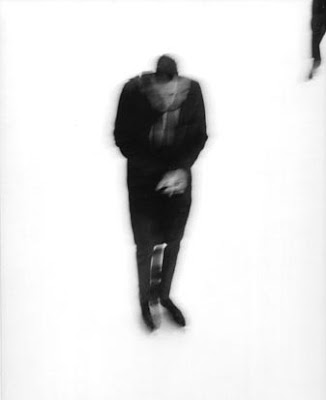 Man Skater
The vertical
What I notice in the selection of photographs Don sent me, along with their obvious shimmering sensitivity and non-invasive touch, is their verticality and angles. In House, Ice, River and New Egypt Hudson the verticality of trees; in Man Skater, that of the human body. These verticals, photographed into the exquisite portraits that they are, echo the theme so articulated in Chinese thought, joining the earth and the heavenly spheres, which is a north south, vertical movement, a cosmic stroke.
My friend Tom Pathe, lifelong rolfer and meditation aficionado (led by "the drala principle" into deep investigations and insights into the "inner" dimensions of the human body) made me aware of 45 degree angles  (as do all of Don's photographs, but especially Blur Branch). These angles, it seems, are universal aspects of awake as well as drala-delivery systems; they include the natural aesthetics of nature, lines in the human body from, say, the sternum to the sacrum, as well as the angle of the vagina and the erection (for those familiar with the Ashe practice, consider that also).
Lineage
Finally this week, I offer something on the theme of "lineage." Another friend I am fortunate to have is Jim Yensan; reader, gardener, photographer, father, adjunct professor of meditation at Naropa University and "Mac Therapist" (he recovers lost files, solves printer glitches and saves computer neophytes from themselves). 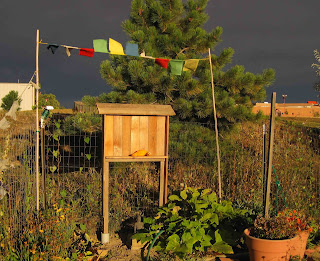 Jim's vegetable patch
Jim is a lifelong student of Chögyam Trungpa and in the five-minute video clip below, Jim talks about first meeting Chögyam Trungpa in the early 1970s as well as first beginning to teach Buddhism. This is a story about lineage; making a genuine connection with a lineage and lineage holder, and about trust, how lineage establishes or restores trust in ourselves. Here is an inclusive definition I gave to lineage on my website:

A lineage, as the word is used here, means any tradition that evokes and propagates drala. A painting, say, of Cezanne is loaded with drala. A man like Cezanne does not simply happen, but is someone who received the training and inspiration of countless ancestors before him and then put what he received into practice. That Cezanne apocryphally painted until his eyes bled is a measure of the work and sacrifice required to become a great lineage holder. Spiritual or religious lineages have no doubt produced our greatest lineage figures, but the path of drala cannot be defined as strictly sacred or secular. It could occur wherever genuine goodness and devotion are manifested. We might not even realize the lineages we are already part of; anyone who has ever read a poem has made contact with one of humanity's most universal, primordial and wonderful lineages.

Posted by Bill Scheffel at 5:09 PM