A GRADUAL JOURNEY TO THE OIL CATASTROPHE (PART III) 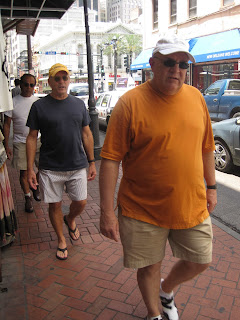 
Today's title The Other in this case refers to a book of lectures by Polish writer Ryszard Kapuscinski, published posthumously in 2008, which explores Kapuscinski's conviction that the most desirable human conduct is to move toward "the other," to directly encounter those who differ from ourselves. An infinite continuum that might begin on the extreme end with the object of our prejudice or hatred but eventually reaches our own doorstep, our wife, husband, daughter or best friend. Ultimately, no one completely agrees with us.
This "engagement with the other," is an expression of the bodhisattva vow, the Mahayana Buddhist ideal of compassion or "exchanging oneself with other." It struck me that my trip to New Orleans was an opportunity to further explore the fact that although we don't agree, we nevertheless feel the same. As the Tibetans say, "All the beings just want to be happy." Might we all be allies in the face of what matters the most, such as the oil catastrophe?


. . . . . . .
Drala can be translated as "above conflict"; that the world is not struggling with itself, but in our confused perception we struggle with the world. The drala principle proposes that when we release our "acquired conditioning" we discover the natural intelligence of non-struggle within us, a blossoming state of joy. Acquired conditioning often reveals itself as our internalized "shoulds," all kinds of second thoughts that deflect seeing things as they are.

Eduardo Galiano wrote a poem that gets at this:

Three of my walks in New Orleans took me into the Ninth Ward and the Lower Ninth Ward, the primary neighborhoods that delivered pictures to the world of people left behind, stranded on their roofs in the floods when water driven by hurricane Katrina breached the levees. In the handful of off-the-cuff video interviews I conducted on my walks, my inquiries began with questions such as "How is the oil spill effecting you?" or about water in general, but increasingly I found myself simply wanting to ask people, "What do you want?"

I asked all of these questions of Faith and Perry, two young people I encountered, along with their dog Grimace, on the porch of their house in the  Ninth Ward - as seen in this 5-minute video documentary.


NOTE: If the player below does not work for you,
go directly to Vimeo.
On Vimeo you will also see a LARGER SCREEN.
Faith and Perry from Bill Scheffel on Vimeo.
Posted by Bill Scheffel at 11:46 AM