A GRADUAL JOURNEY TO THE OIL CATASTROPHE (PART II) 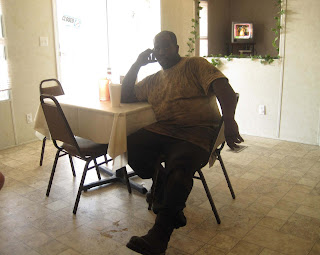 Oil rig worker near Venice,
Louisiana.
Hwy 23, Plaquemines Parish, Louisiana
Three weeks ago I decided to spend a week in New Orleans, traveling there after a wedding I was invited to attend in Chicago, and before visiting my son in Portland, Oregon, where I am now. Now I am standing in my son's bathroom (he is still asleep, this is where I can work without disturbing him) before my computer and a large, toothpaste splattered mirror. Now I am left facing myself in the mirror, as one always, so to speak, is.
Thanks to a comment a reader made, I have changed my usage from oil "spill" to oil catastrophe; a word defined as "an extremely large-scale disaster, a horrible event." I went to New Orleans to, as I wrote a few weeks ago, "investigate" the catastrophe and now I am looking over the photographs, video footage and notes I took in to order assimilate, along with my memories, what I have learned. My body feels distinctly different after the trip. Of course I have aged and of course impermanence is the rule, but a more telling reflection says I have encountered something both symbolically and viscerally potent (like meeting a teacher?) and it is my duty to unfold the symbols and treasure the viscera, to let none of this drop from my hands.
In sacrifice, the viscera or organs of the slain animal were part of the augury priests were compelled to divine. It strikes me that New Orleans has suffered a double catastrophe, a "natural" one in the form of Katrina and a "man made" one in the form of the Deepwater Horizon disaster. Besides 9/11, there are not too many examples of a post WWII American City being devastated by an event. Perhaps ideally a disaster is supposed to decrease hubris and increase sympathy or love. Collectively it may be hard to claim that America is a less proud and more loving country since 9/11, but when I  visited New York City earlier this year I was struck again and again by a kind of exuberant courtesy, an enthusiastically choreographed helpfulness that I encountered from subway attendants to just about anyone I asked anything of in the street.
Perhaps what I can say that after a week in New Orleans I feel better equipped to understand things I've sought or been committed to for most of my life. I arrived in Louis Armstrong International Airport without a telephone number, without a map, without having investigated websites about the oil catastrophe, without having read a history of New Orleans and without even booking a hotel. I arrived without an education but determined decrease my ignorance. The expertise I gained was only in the experience that unfolded before me, hour by hour and day by day. Everything significant and that seemed to pertain to the oil catastrophe (my expressed purpose) seemed to happen by accident, through double-take or an unexpected glance into the rear-view mirror.
I also tried to take the view (as a practice) that everyone I met, every opinion I encountered, was a part of me. And that I was complicit in everything. I've long been influenced by similar statements of two Buddhist teachers. Thich Nhat Hanh argued that he could easily have been a Thai sea pirate (who stole from, raped and often killed the "boat people" fleeing Vietnam after the fall of Saigon in 1975) if he had been born into circumstances that gave rise to piratetry. Pema  Chödrön once asked her audience if there was a parent among them, including herself, who could not understand a child abuser because what parent had never lost their temper, had never shook their child, had never inflicted some degree of emotional or physical violence upon their son or daughter? 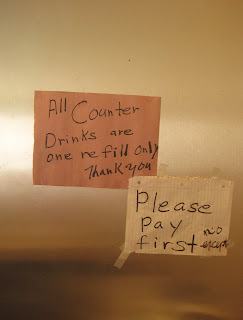 Signs in restaurant near
Venice, Louisiana.


ACCIDENT #1: On a journey to actually see the oil that had just made contact with shore, I bought a map, rented a car and drove to a town that more than one local referred to as  "the end of the world," Venice, a dot on the map at the south end of Hwy 23, Plaquemines Parish, Louisiana. All the ABC and CNN and other news crews had already been there, but I didn't see a trace of them in the brief time I spent. What I saw was a restaurant with a Harley parked in front, a couple of motels and a tangle of piers, harbors and construction cranes with lots of sheriff patrol cars parked about. The gravel road I followed eventually led to a fence, a keep out sign and a large hanger with the name Hallliburtan on the side.
Like the returning bodies of solders killed in Iraq that photographers were denied access to until recently, I seemed to be in the symbolic tableau most of our citizens find themselves in. If we think of our country and the global economy as a "family system" there are, naturally, many things the more privileged children  should not be allowed to see. Combat, factory conditions in Juarez and oil coating the white sands of the Louisiana shore must be as off limits as Dad's drawer of racing forms and photographs of his mistress. This impression was amplified later in the day when I stopped to film an oil refinery along the side of Hwy 23. A Sheriff pulled up, questioned me and announced he "had to report me to the FBI." I had ostensibly broken no law, but in the post 9/11 Patriot Act era an oil refinery is a "potential terrorist target" that obliged the Sheriff to conflate my legal act into an interrogation and a final stern warning that he "never wanted to see me on this road again." 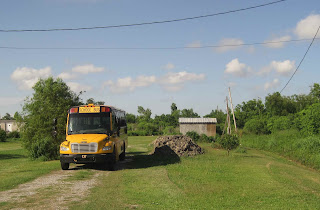 News reports speak about the "crystal blue waters" of the gulf, as if the spill is is a toxin entirely new to an otherwise unspoiled area, yet scientific studies have long-cited the Mississippi River coast as " the single dirtiest, most imperiled coastal ecosystem on earth." It's not that the river itself is so highly polluted, but it provides continuous flows of nitrogen and phosphorus into the ocean, the vast runoff of chemical fertilizers from American farms which promote algae growth and so greatly decrease the oxygen content of the water that large "dead zone" had been created, no longer able to support marine life. To acknowledge this is in no way to discount the sweeping destruction of the oil spill but to acknowledge the insidious degradation that continuously goes on below the waters surface, often belied by a surface that may still look "crystal blue."

Scott Nixon (University of Rhode Island, USA) explained that this process, known as eutrophication, is not a recent phenomenon, but one that first appeared with the spread of urban sewage networks in the second half of the nineteenth century and has been accelerating sharply since 1970. According to Nixon, “we are seeing a clear global increase in the incidence of hypoxia in coastal ecosystems,” a phenomenon whereby the oxygen concentration in water drops so far that it causes catastrophic mortality among marine organisms. Prof. Nixon went on to add that “there is a relationship between the health damage done by the excessive consumption of meat in developed societies and the health damage done to coastal ecosystems by the massive nitrogen emissions associated with meat production.”- Science Daily 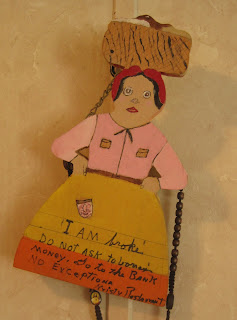 Shortly into the eighty-mile drive from Venice back to New Orleans I stopped, somewhat uncertainly, at a restaurant named Kristy's, which consisted of a double-wide mobile home with a single automobile parked in front. Here I spent one of the most remarkable hours of my trip (if not my life) in the company of three oil rig workers and the sole cook and waitress of Kristy's, its proprietress, a black grandmother who called herself "T." T took my order and later talked to me at length with a head-on wit, so gracious, guileless and shrewd that I felt I'd encountered a new and more exhilarating form of love, fast food style (though her fried-food took twenty minutes to prepare). We talked about catfish, her nine grandchildren, the poverty of the region, and her hat, a headpiece to keep her hair out of the food that I found attractive and even elegant but that T claimed made her look like Aunt Jemima - which became the cause of much laughter and the reason she steadfastly refused to let me take her photograph. T agreed with me wholeheartedly when I told her she was lucky to have given love to so many people and had so many people who loved her. 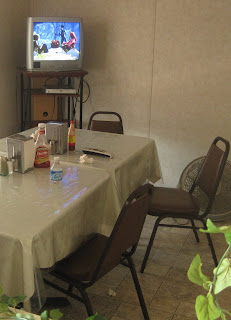 Interior, Kristy's Restaurant.
In truth, everything about my trip down Hwy 23 felt like an accident, including waking up that morning with no idea I would be taking the trip in the first place. But the "accident" I cited earlier was one of a different kind, and a very painful one. Three young men were in the restaurant when I arrived, workers who neither acknowledged my entrance nor gave me the slightest feeling I was intruding. They just sat there, waiting for their food, making an occasional cell phone call and existing in their own familiarity (which included this restaurant). As I acclimatized to a place that was decidedly not familiar to me, I began to realize I should ask to video interview them. I went out to my rental car to fetch my camera with the vague apprehension which  accompanies these sudden decisions to intrude upon strangers.
I returned from my car, introduced myself and learned the men's names were Lester, Cory and Wallace. I told them I was making a film about the oil spill and water issues. I asked if I could interview them and their collective response was a willing shrug. "Why not?" Lester replied. And so I asked each a few questions and took about five minutes of footage. I wouldn't be writing about any of this, expect for the "accident." It turned out, something I learned only days later, that the audio didn't record. I ended up with video footage that had no sound. I could have lost my camera and hardly given it a second thought, but I grimaced all day that I had lost this footage, because it was exactly what I had hoped the trip would bring. I realized that all I could do was post some stills to this journal and let the photographs speak for themselves. 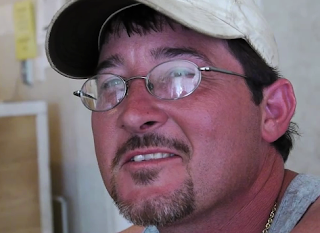 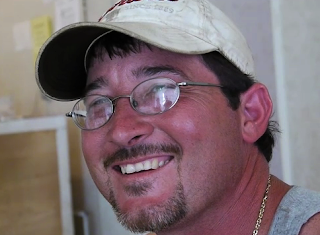 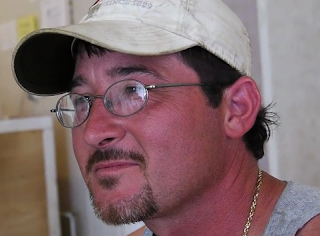 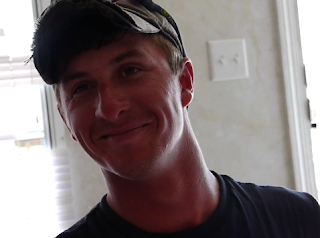 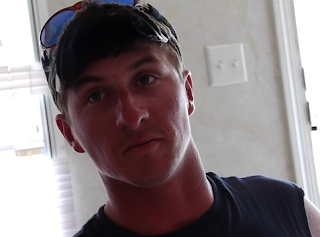 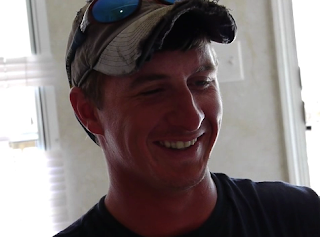 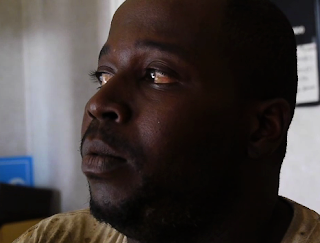 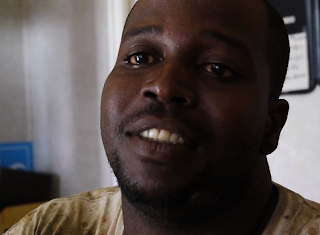 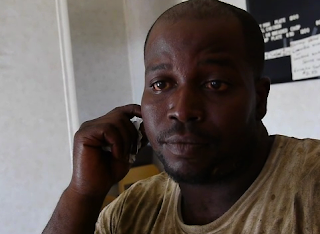 "7,000 Miles Nonstop, and No Pretzels"
The three photographs below and the headline above are from a New York Times article published last Tuesday, May 25th. Scientists are now able to plant transmitting devices in birds that migrate over vast distances, from the Arctic Circle, say, to as far south as Australia. It was assumed the birds flew over land and made many pit stops along the way. But the transmitters have shown otherwise. The bar-tailed godwit leaves Alaska and flies nonstop over 7,100 miles of ocean to New Zealand. Researchers in Alaska also observed, "the godwits were feasting on clams and worms as if they were not going to be able to eat for a very long time." 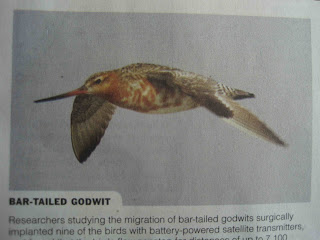 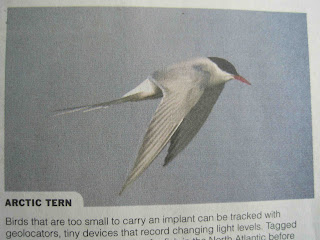 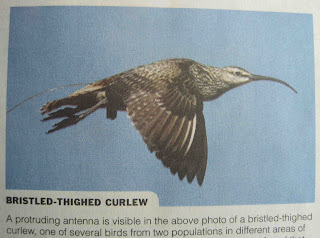 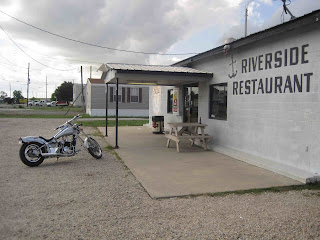 Restaurant in Venice, Louisiana.
Posted by Bill Scheffel at 1:24 PM