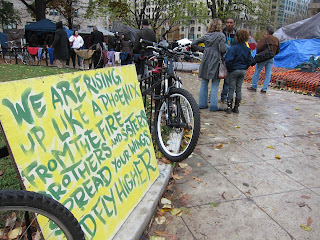 OWS encampment, Washington, D.C.
My blog this week is about my journey to Washington D.C. and encounter with the Occupy Wall Street movement. As I was writing this I watched an incredible interview on Democracy Now about Sonia Jacobs and Peter Pringle. Sonia and Peter were both convicted of murdering police officers - she in the U.S., Peter in Ireland - and sentenced to death. After years on death row, their convictions were overturned, they were exonerated and released from prison... and many years later met and married each other! What is equally remarkable is that they both credited surviving their ordeal, including years in solitary confinement, through yoga and meditation. Their story is the finest Thanksgiving story for the rest of us that I could imagine


VOYAGE TO (OCCUPY WALL STREET) WASHINGTON D.C.
Tuesday
I took the Long Island Railroad into New York City. Just north of the Jamaica Queens stop, the train passed a refuse collection center. Men were hauling wet cardboard boxes to the side, separating recyclables from the other masses of garbage, and the seagulls swooped and circled overhead, keen with enthusiasm for the sea of rotting life below them. After all the houses and lawns and apartment buildings we'd passed, seeing the dump was like viewing a body opened for stomach surgery - an eight-second glimpse through the train window into what else is going on.
The refuse center suddenly brought me back to the Sunday market in Arad, where I could have bought a live peacock or rabbit and taken it with me on the train. But this was New York state, not Romania, and the only animal I could take on this train would be a seeing-eye dog. It was in Romania that I decided to return to the United States in time to support the group of OWS protesters who were marching from NYC to Washington DC. Now I was in the final stages of my plan, on a train to Penn Station where I would transfer to Amtrak and arrive in DC later in the day. Tomorrow the protesters would march on the capital and so would I. Or so I thought. 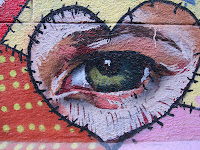 Graffiti, Budapest.
I arrived at my friend Lisa's apartment and tried to update my information about the marchers. It had been hard to find much information about them on the internet. Finally I found their blog, but even that said little about where they would be the next day.
Wednesday
Still without specific information on the OWS marchers, Lisa and I decided to take the Metro to the Capitol. "They're bound to show up there sooner or later," I said. Before leaving the house I got an e-mail from a friend who I had told about my plans. He was enthused and supportive about them, but disclosed "I find it difficult to commit to one movement or another. Everything is changing and so do the movements and the conditions." That view, along with so many others, is also part of my own. Within the great Everything-Is-Changing how can we not each be versions of Walt Whitman contradicting ourselves? Yet as another poet-I-love wrote, it is impossible not to have a politics:

from Rant by Diane Di Prima

The Capitol building was luminous from last night's pouring rain and this morning's sunlight, filtered by clouds but bright enough to electrify all of its white, its columns, its dome and the statue Freedom above it, the 15,000 pound cast bronze sculpture of woman holding a sword and draped in an Indian blanket, whose face the looks decidedly kind, warm, and at peace with herself. A drala of the feminine principle if there ever was one, standing above a legislative building with a military budget almost as large as all the other countries of the planet combined.
Beyond the luminosity the place was virtually deserted. The occasional clusters of tourists were swallowed by the immensity of the place, the pigeons were few, and there wasn't a protest sign in sight. Nope, the marchers clearly weren't here yet, but we had a feeling they never would be. We stopped to ask one of the Capitol policeman about the OWS march that we'd heard was converging on the Capitol. He scanned the day's schedule but there was nothing on it about any protest or political event. 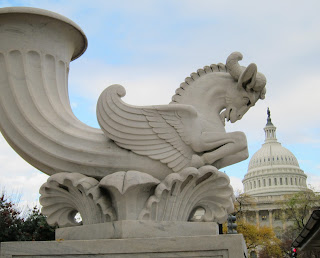 Ram with cornucopia, Sam Rayburn House Office Building
McPherson Square
Lisa knew that the OWS Washington DC tent city was located at McPherson Square, so that is where we went next, and where my own experience of OWS crossed over from virtual to visceral, where my story-line went from mediated and imagined to concrete--grass and a refugee camp of tents, tarps, and chaos, a sampling of particularity at 11:17 AM on the day before Thanksgiving.
Apart from of the statue of the Union general and namesake of the square, I discerned no particular center, central theme, or population. The dozens and dozens of tents and semi-tents seemed unoccupied at the moment and the majority of the people standing around were African American men; many of them homeless, some Vietnam era, some young, some mentally ill. One black man was given wide birth by the passers-by as he repeated the same series of gyrations and muscle-flexing, a dance-schizophrenia of working-something-out. The pigeons seemed to have gotten used to him and flocked at the birdseed near his feet.
Lisa and I walked through the encampment. I was not sure what she was feeling (I didn't really know what I felt until the middle of the night). I've had so many experiences in the last year of going to a new town, a new country, handing someone my passport, crossing the membrane from other to gradual inclusion. Now I was not just crossing into McPherson Square, but into another country. My trepidation, solidarity, and naïveté had to cross. My sense of being an ancestor to the movement but also an interloper and lightweight had to cross. I was keen to photograph and video tape what I was about to cross into and so my voyeur, paparazzi, and cliché-monger had to cross along with my Canon cameras and nascent memories that I would later write about.
In those first moments I felt understanding for the David Brooks and the Newt Gingrich-ones, those who dismissed, scorned or mocked these protesters, people who would never see these encampments for themselves. But this place was also a stretch for the middle class, the swing voter, and just about anyone one else who lives a semi-comfortable life. Even for a so-called progressive or liberal, being here was different than honking in solidarity from your Volvo or sending a supportive e-mail.
McPherson Square was thick in dreadlocks, hand-painted signs, wheelchairs and cigarette smoking. It was thin on infrastructure; mangy, wet, and deteriorating tarps, no toilets, no running water. It was thick with passers-through; dog-walkers, supporters, the curious, TV crews, gang-bangers and gang-banger look alikes. It was thin on defense against the cold, money, food and electricity (there were many solar panels). It was thick in stories, thick with the human sophistication that comes from interacting on the spot, on the street, with just about anybody in a place where just about anything could happen.
The iconic and necessary elements of these tent-cities were easy to find: the library tent, the first-aid tent, the mess tent. I reached the information tent and approached a multitasking African American woman in her late thirties who summarily asked me what I wanted. I said I wanted to help. "We need blankets, socks, thermal underwear - if you have that kind of money - and food donations," she said, wrote these out on a yellow sticky-pad note and handed it to me. I asked if I could help on Thanksgiving and she said, "Of course. You can bring food and you can work in our kitchen." Her multi-tasking was minute-by-minute triage and she was good at it; assessing my sincerity, welcoming me without fooling herself that I'd come back with anything on the list, snapping at an approaching TV news crew that she didn't want to be photographed. You could put her in charge of anything, I thought, and she'd be good at it.
.  .  .
When Lisa and I left McPherson Park we walked west on K Street. We went from virtual refugee camp to Hilton Hotel and Capital City Club & Spa. We went from pizza on damp cardboard to steak and lobster and white tablecloths, from donation buckets to Bank of America ATMs. The encampment was no more than a vulnerable, fleeting moment in time. It could be decimated overnight by a 2:00 AM police raid or simply by a change of heart in the protesters. I suddenly felt a different ninety-nine percent versus one-percent equation. The encampment was representing, consciously and unconsciously and through its diverse demographics, 99% of the realities we find difficult to face, and the rest of K Street was expending 99% of its energy pretending these realities were otherwise. 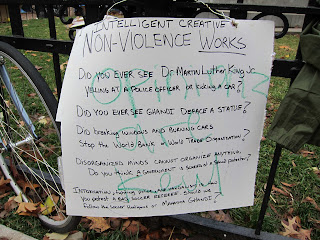 Non-Violence Works
Did you ever see Dr. Martin Luther King yelling at a police officer or kicking a car?
Did you ever see Gandhi deface a statue?
Did breaking windows or burning cars stop the IMF or World Trade Organizaton?
Disorganized minds cannot organize anything. Do you think the government is scared of a stoned protester?
Intoxication, fighting police and vandalism is how you protest a bad soccer referee. Should we follow the soccer hooligans or Mahatma Gandhi?

Posted by Bill Scheffel at 9:23 AM